— Another night when the Rays are in town for Yankees history: 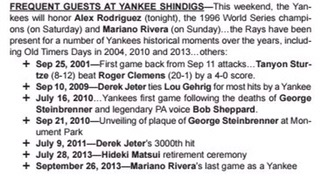 — Just finished with another productive (and exciting) #BaseballForever meeting. Everyone should be just as excited as I! Still, we need your support as a community. There are two ways you can help support our efforts in the short-term:

— Don’t forget, you can read about tonight’s pitching matchup in our series preview.