The biggest news going into the series isn’t the culmination of Alex Rodriguez’s career, which couldn’t have come soon enough in my opinion. Sorry A-Rod, you pompous asshole, I’m looking forward to the debut of shortstop Matt Duffy, who was acquired by the Rays in the trade of Matt Moore to San Francisco.

Leading up to his activation from the DL, Tampa Bay shifted Brad Miller to first base and optioned Richie Shaffer back to Triple-A Durham, freeing up space for Duffy on the roster .

Duffman came up as a shortstop, but was placed at third with the Giants because of a little middle-infielder, you may have heard of, named Brandon Crawford. Though when Matt Silverman put together the trade for Duffy, he did so with an eye on solidifying the team’s defense moving forward.

Our hope is he is a ‘two-out shortstop’ —and what I mean by that is when we’ve got two outs and a ground ball is hit to him, the inning’s over. I compare, just from watching him take ground balls, with the utmost respect, he looks like a J.J. Hardy. Looks very, just, solid. Catches balls. We’re not looking for him to go range around all over the diamond. But when the ball’s hit to him, you’re out.

Duffy allowed that he wants to be a solid fielder:

I wasn’t making the highlight reel, I guess you would say, but I was proud about being counted on to make the routine play, I guess that was kind of my thing. And trying to be as calm as possible all the time no matter what the situation.

We wrote about what you can expect from the newest Ray after the trade deadline.

Meanwhile back at the ranch…The Rays are 5-2 in their last seven games against the AL East, this in spite of their most recent series loss to Toronto. The Yankees, on the other hand, are 0-4 in CC Sabathia’s (who gets the start Friday) last four home starts, and 0-5 in his last five starts against the AL East. They did just take two of three from Boston in their most recent series. 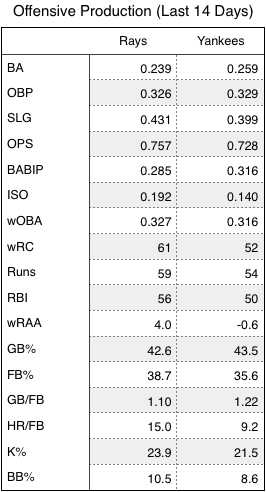 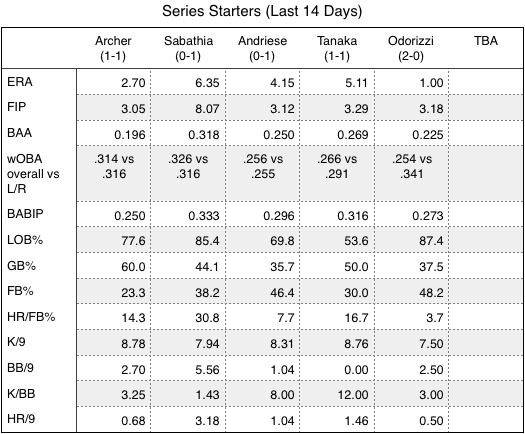 Archer mowed down the Twins over six innings on Saturday, allowing one earned run on three hits and three walks over six innings, collecting seven K’s. The Rays’ ace put together his fourth consecutive quality start and notched his second victory over that span. Despite the gaudy record, Archer has settled into a groove since the All-Star Break, giving up total 13 runs (11 earned) on 24 hits and seven walks over 32-2/3. He also whiffed 38 over that span, and lowered his ERA from 4.66 to 4.26.

Andriese allowed three runs on six hits and a walk over 4-2/3 innings on Sunday. He struck out seven. The righty was stretched out a little more, throwing 76 pitches, although he got yanked in the fifth inning without being in any particular kind of jam. Look for him to pitch deeper into the game Saturday, and possibly even pitch long enough to qualify for a win.

Odorizzi gave up four runs (two earned) over 5-1/3 innings in a no-decision on Monday against Toronto. He relinquished eight hits, walked three, and fanned four. That start broke a stretch of three consecutive shutout starts for Odorizzi. Still, the righty has allowed just six runs in five starts since the All-Star Break.

Grimace gave up three earned runs on six hits and four walks over 5-2/3 innings in a loss to the Indians on Saturday. He struck out five. The southpaw was given an early 2-0 lead, however, he struggled with his control and couldn’t sustain the lead. As it was written elsewhere, Sabathia’s troubles actually started with the long ball, as he gave up a 399-foot homer to Jason Kipnis in the fourth. He yielded an RBI single to Rajai Davis in the following frame, and then Mike Napoli helped chase him with a 408-foot solo shot to right center. The 36 year-old has now given up eight earned runs over his first two August starts. Sabathia allowed three runs on nine hits and and three walks over 4-2/3 lackluster innings against the Rays on April 22nd. Key matchups: Tim Beckham (1-4, RBI, BB), Logan Forsythe (8-18, 4 2B, 2 HR, 5 RBI), Kevin Kiermaier (1-2), Evan Longoria (26-67, 9 2B, 6 HR, 14 RBI, 13 BB), Steven Souza Jr. (3-7, 2BB)

Tanaka allowed one run on six hits over six innings while striking out eight on Sunday, in his best start of the season. The righty threw 21 of 25 first-pitch strikes, consistently keeping the Indians behind in the count. It was first time in six starts (the seventh time all season) that Tanaka hit a triple-digit pitch count, as the Yankees are carefully managing his workload. Tanaka blanked the Rays over seven innings back on May 27th, allowing just two hits. Key matchups: Corey Dickerson (2-5, 2B, RBI), Kevin Kiermaier (3-5, 3B, HR, RBI)

— Clearly some people give a shit about A-Rod, however, I’m not one of them. I cannot wait for the 27th out Friday night, to never have to bear witness to this smug asshole again. That said, Marc Topkin (Tampa Bay Times) wrote a fitting eulogy for the death of A-Rod’s pock-marked career.