When the Rays aren’t in the playoffs, my focus shifts to one ball club that is. This season is no different, and my focus is firmly on an old National League standby, the Chicago Cubs. The Cubbies had been my favorite team until 1998 when the Devil Rays took to the confines of Tropicana Field, at which point they became my NL team. The Cubs and handful of old friends — namely Ben Zobrist, Jason Hammel, Joe Maddon and Dave Martinez — are ready to butt heads with the cowboy, Bruce Bochy, and his San Francisco Giants. 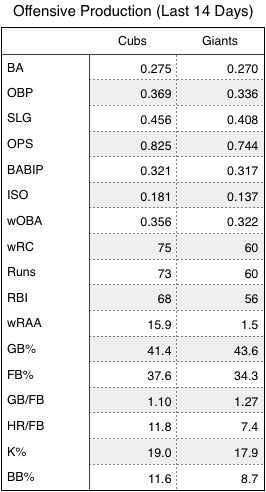 The Giants are ranked ninth in scoring (average of 4.41 runs per game) and OPS+ (94), and they really aren’t a powerful team — ranked 13th in homers (130), including just 55 at home. Unlike the Cubs, San Francisco doesn’t have a single player with 20 homers to his name. Still the Giants were solid against right handed pitching (.737 OPS), but less so against southpaws (.703 OPS). Despite uneven production from Buster Posey, Joe Panik, and Hunter Pence, there aren’t many places for opposing pitchers to hide.

They posted just two months above .500: May when they went 21–8, and June when they went 17–10. But even in their dismal second half San Francisco outscored opponents by nine runs. The Giants won seven of their last 10 games, allowing them to eke out a Wildcard berth on the last day of the season.

Much of Chicago’s success comes from an excellent starting rotation. As Jay Jaffe (Sports Illustrated) wrote,

The Cubs had the majors’ stingiest rotation, with a 2.96 ERA; the jump to the next-lowest team in the NL (the Nationals at 3.60) is almost as big as that from second to sixth (the Marlins’ 4.32). The NL had 13 starters who qualified for the ERA title while preventing runs at a clip that was 15% better than average; the aforementioned Cubs’ front four all fit that description, with the Mets, Giants and Nationals as the only other teams with two. The story is similar when it comes to strikeout rates of at least 7.88 per nine (league average): The Cubs have four of the 16 qualified starters, and the Giants and Nationals are the only other teams with two. Oh, and the Cubs’ rotation also threw more innings than any NL team (989) and was the only one with a quartet of 180-inning studs.

The Cubs also are masters at preventing runs — 0.35 per game fewer than any other NL team— thanks to a defense whose +95 DRS ranked first in the league by 36 runs. Jaffe also noted Chicago’s .728 defensive efficiency was 26 points higher than the second-ranked team, the Giants. Via Baseball Prospectus’ Park-Adjusted Defensive Efficiency, the Cubs’ 6.38% above average is the all-time record, outdoing the 2001 Mariners’ 5.54%.

Bochy potentially will lean on Jeff Samardzija and Johnny Cueto in the first two games of the series, then Madison Bumgarner and Matt Moore in the third and fourth contests. MattyMoe pitched brilliantly against the Dodgers in the final game of the season, although he has been erratic with both Tampa Bay and San Francisco this season, making him a league-average starter. With the exceptions of Jason Heyward and Miguel Montero, the Cubs tend beat up left handed pitching. After Bumgarner, Moore could seem like a walk in the park.

The bullpen has been the biggest weak spot for San Francisco, as the Giants led the league with 32 blown saves this season. They  lost nine games in which the Giants led in the ninth inning, including five in September and October. Because of it former closer Santiago Casilla lost his job to Sergio Romo. The ‘pen was able to lower its ERA and FIP in the second half (3.35 ERA and 3.62 FIP, previously 3.94 ERA and 3.93 FIP in the first half), but the overall 3.66 ERA and 3.78 FIP are the highest of any NL contending team.