The Tampa Bay Rays are in salvage mode today, looking to win the getaway game — a game, really — against the Boston Red Sox. Since Opening Day, the Rays have lost seven consecutive games, and have been outscored 31-11 over their last four.

As Neil Solondz (Rays Radio) noted, this is the toughest Rays start since 2011, when the team went 1–8 yet came back to end up with 90 victories and a playoff campaign. The Rays have scored 20 runs in eight games so far this year. The 2011 club scored 20 runs in the first nine games, and nine came in one contest.

And like the 2011 Rays, the 2018 squad next will head to the south side of Chicago where the former squad began to turn around its season.

Or as Bill Madden (N.Y. Daily News) put it, principal owner Stuart Sternberg “should be ashamed” for fielding an “unwatchable” and “terrible” team with “no pitching, no hitting, no exciting players other than Kevin Kiermaier.” It seems Sternberg is “just looking for an excuse to move the team to Montreal.” …Not that I put much stock in the Rays relocation rumors, but that’s for another day.

The Rays scored two in the first inning yesterday, yet Jacob Faria allowed eight runs over 1-2/3 innings in a 10–3 loss. To put things into context, Faria threw 73 pitches and got only five outs. According to the hurler, the game sped up such that he couldn’t slow things down.

Honestly, I don’t even know, Faria said. Nothing was there from the beginning. I couldn’t figure it out. Couldn’t make an adjustment. … Just letting things race in my head a little too much. Just letting the game speed up. Just not making the adjustment in time. …Just going through the motions pretty much. Just trying to find something that would work. …Every game before this, I’ve been able to kind of figure it out and grind through it. Today was one of those days I couldn’t figure it out. It’s frustrating, it’s embarrassing. We’re in the big leagues now and I can’t throw strikes to anybody. Three-one count to almost every hitter. This is embarrassing. That’s the No. 1 word I would use.

Andrew Kittredge will get the start in a bullpen day this afternoon. The right-hander has pitched well in both of his appearances this season — allowing two earned runs over 5-2/3 innings, while walking three (two intentionally) and fanning none — yet suffered the loss in each. Ryan Yarbrough and Matt Andriese are reportedly available to provide length in the bullpen if needed.

Eduardo Rodriguez will come off the disabled list to start for the Red Sox, who at 7-1 is off to their best start since 1920.

You can read about the series in our preview.

The New What Next: Rays vs Red Sox — a series preview, part two 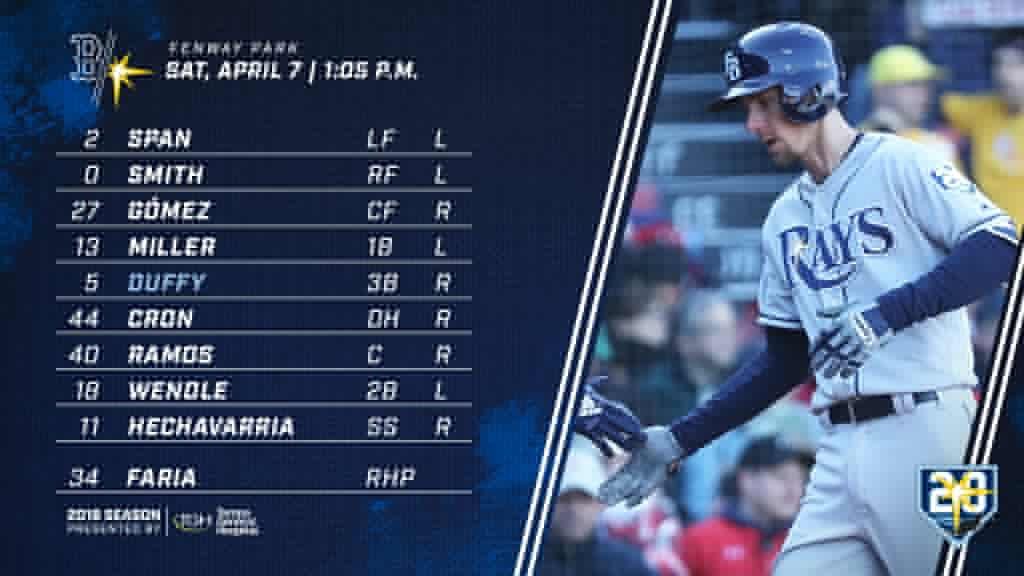 — If it’s any consolation, odds are good that the Rays wouldn’t be any better at this point in the season had they held on to Evan Longoria, Steven Souza Jr., Corey Dickerson, Alex Cobb, or Logan Morrison.

Longoria was 0-for-17 before homering for his first, and through Friday, only Giants hit, admitting his cold start was “a little bit magnified” with “a lot of people looking for me to come out of the gate hot, including myself.” Batting fifth (behind Buster Posey – irony, huh?), playing third, wearing No. 10 … okay it doesn’t have quite the same ring, though he is still walking up to Tantric’s Down & Out.

Dickerson has been starting daily in left (which didn’t go well in the second half with Rays) and batting fifth, hitting .238 through five games, as he essentially replaces longtime star Andrew McCutchen. Tweeted for first time since May 2016 to thank Pirates fans for a warm welcome: “My family and I are glad to be here!”

Cobb will make at least one more minors start Monday before being activated after late-spring signing.

Morrison has been slotted fourth/fifth in lineup, splitting 1B and DH, hitting .067 (1-for-15), has large clubhouse presence.

Tommy Hunter got $18 million for two years but hasn’t pitched yet due to late-spring hamstring strain.