Skip to content
The Minnesota Twins rallied late in the seventh inning in the series opener on Friday, overcoming a one-run lead and defeating the Tampa Bay Rays by a score of 3-2 — snapping Tampa Bay’s three-game win streak.

Tampa Bay took a 1-0 lead in the second when David DeJesus hit a solo home run to right off starter Phil Hughes. DeJesus is now 7-11 with two homers against Hughes. However, Brian Dozier tied the game in the fourth with a solo homer of his own.

The Rays took the lead once again in the fifth after Joey Butler doubled to right with one out, and scored on Kevin Kiermaier’s blooper to left for a 2-1 advantage. It was a lucky hit that never should have been. The ball hung up long enough for left-fielder Eduardo Escobar to get to, yet he allowed the lazy hit to fall into play, opting to play it on a hop instead.

The lead was short lived.

In the first six innings of Jake Odorizzi’s start, the Rays held Minnesota to 0-for-8 wRISP, with the Twins sole run coming on Dozier’s solo homer. With the Twins trailing by a run in the seventh, number eight hitter Aaron Hicks led off with a single to left before Danny Santana tripled into the right field corner, scoring Hicks and knotting the game at two. Manager Kevin Cash pulled Odorizzi in favor of Kevin Jepsen, who promptly gave up the go-ahead sacrifice fly to Dozier for a one run advantage.

It should be noted, Odorizzi probably shouldn’t have allowed to start the seventh inning — especially with 95+ pitches under his belt. The skipper had RHP Brandon Gomes warming during the tense sixth inning, so a pitching change was expected at some point. Why allow Jake to become overexposed?

To his credit, Cash acknowledged that he put Odorizzi in a bad position,

Looking back, he’d probably given us plenty to get the win. Put him in a tough situation.

In kind, Odorizzi was disappointed by the outcome:

I kind of pride myself on one-run games when we have the lead. To give it up right there really, it’s very frustrating to say the least.

Jepsen didn’t allow any base runners in the seventh.  Brandon Gomes threw a scoreless eighth to keep the Rays within a run.

The Rays put up a threat in the eighth inning after Rene Rivera hit a leadoff single against Blaine Boyer. Tim Beckham pinch-ran for Rivera. Beckham moved to second on a wild pitch after Kiermaier flew out to center. However, Steven Souza Jr. (and his 36.3% K%) struck out swinging before Evan Longoria flew out to left to end the inning.

They put up one last threat against closer Glen Perkins in the ninth. Perkins allowed a pair of two-out singles to Brandon Guyer and Asdrubal Cabrera in the ninth to put a runner into scoring position. Yet Joey Butler to hit a game ending comebacker on the second pitch of the at-bat.

“We were just a hit away there at the end,” Cash told the media on the subject of the game-ending shortcoming.

Alex Colome will try to bounce back from a bad outing on Saturday when he toes the rubber opposite of Right-hander Trevor May. Colome allowed four home runs against the Yankees on Monday, the most by a Rays hurler at the Trop since Scott Kazmir in 2008. May is coming off a rough start of his own, as he dished up six runs over four innings against the Indians on Sunday. You can read about the pitching matchup in our series preview.

— The Rays inked a two-year Minor-League deal with RHP Kyle McPherson on Friday. The righty appeared in 10 games for Pittsburgh in 2012, going 0-2 with a 2.73 ERA. He is slated to report to extended spring camp.

— Per Marc Topkin (Tampa Bay Times), After seeing Dr. Keith Meister for another opinion on his torn labrum, LHP Drew Smyly is said to be seriously considering an injection/rest/rehab program that could have him pitching by August or September as opposed to season-ending surgery.

— Nick Franklin will continue his rehab at Triple-A Durham today and Sunday. He seems likely to rejoin the Rays in Atlanta for their two-game intraleague series.

— Steve Geltz, who last pitched Saturday, is finally feeling better after a rough bout with the flu going through the clubhouse.

— Today is the day! We’ll see you at Green Bench Brewing Company for our first watch party of the season! 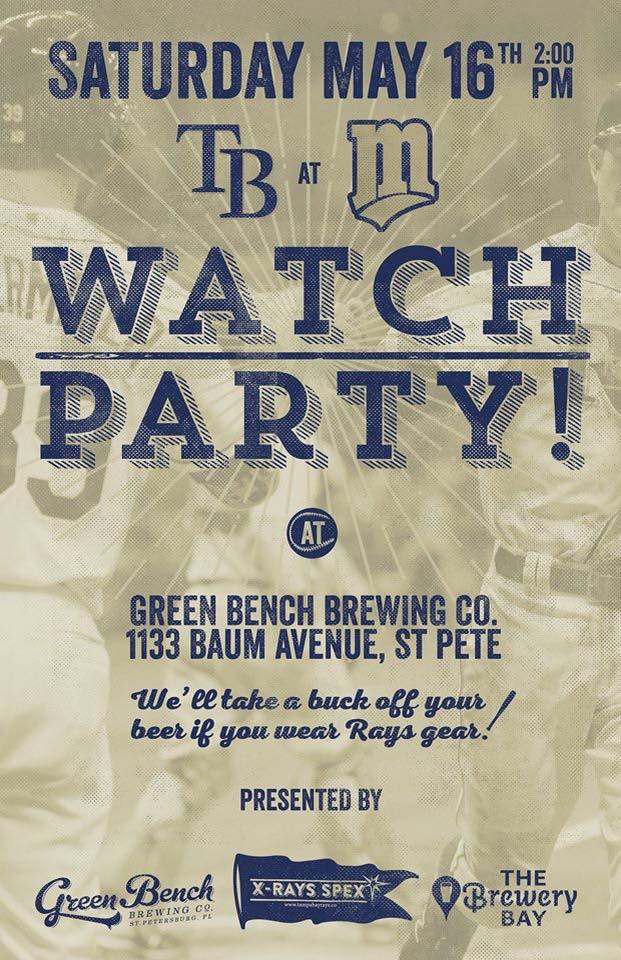