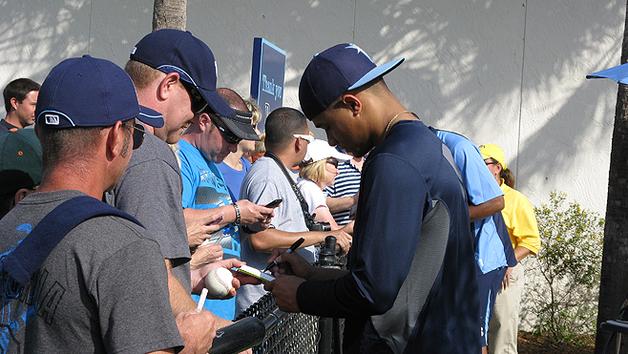 Note: I already wrote about the optioning of three more pitchers on our Tumblr page, but felt it might be worthwhile to re-post it here.

Rays beat writer Marc Topkin noted, “Archer initially was surprised to be sent down this soon, but after a “Great conversation” with team officials (he) understood, and expects to be back.”

“Mixed with my conviction that I can compete at this level and with that conversation that we just had, there are no malicious feelings, there’s no like negative feelings going to Triple-A, going to the minor leagues for who knows how long,” Archer said. “I know I have to continue to develop, and something’s going to happen – every year someone goes down or they need an extra arm. So I’m going to make the most of my opportunity when I come up but continue to maximize my potential in the minor leagues.”

I’m frankly a bit surprised by this move. Archer posted an excellent 7 IP/1 H/0 R/3 BB/5 K/0.00 ERA/0.045 OBA/0.57 WHIP line in three Grapefruit League appearances, and seemed poised to appear on the opening day roster. This leaves Roberto Hernandez and Jeff Niemann to battle it out for the fifth spot in the starting rotation.

A few questions lay in the wake of this move.

Will Archer’s imminent return occur sooner or later? What’s more, what roster moves could accompany his return? Also, is this an acknowledgment that Niemann will more than likely get the fifth starting spot, leaving Hernandez to work in the long reliever role? With Niemann’s history of injuries, I’d imagine that the Rays may be assuming that the tall RHP will go down, and it’s just a matter of time when. Finally, Could the Rays be priming the pump for a mid-season Niemann trade?

Rumors of the willingness for the Rays to trade Jeff Niemann have circulated the last few years, however his trade value has plummeted because of chronic injuries. It would make sense for Tampa Bay to rebuild Niemann’s trade equity, inevitably using him as leverage for some sort of deal in July. As the late Joe Strummer once said, “The future is unwritten.” We’ll just have to wait and see how all of this pans out.

The Rays lost their third straight Grapefruit League game yesterday in a low scoring, 3-1 game against the Yankees. Offensively speaking, the Rays were quiet. However, Alex Cobb absolutely dominated in his five inning stint on the bump. Cobb posted an impressive 5 IP/2 H/0 R/0 BB/6 K line Tuesday, now boasting a 14 IP/8 H/2 R/2 ER/1 HR/1 BB/18 K/.167 OBA/0.64 WHIP slash line, with a 1.29 ERA on the spring. Cesar Ramos, Brandon Gomes, and Will Inman weren’t half bad either, combining for three innings of one hit baseball, allowing no walks while striking out three. The Rays have another off-day today.

The tarp is on the field in Pt. Charlotte, though the game is still expected to go on. (Photo courtesy of Marc Topkin/Tampa Bay Times)

The Rays lost for the first time this spring to the Twins , in a 6-4, 10-inning battle. The injury stricken Desmond Jennings and Luke Scott, were both back in the lineup. Jennings doubled in the first inning and seemed to have no issue with the mild left ankle sprain incurred in Saturday’s game. Scott also didn’t seem too hampered by a tight left hamstring, going yard with a solo homer in the second.

I felt great today, I kept the ball down. … I’m very, very happy about [the way I’m progressing]. Every day I continue to work.

The Yankees will make the trek to Port Charlotte today for a 1:05 PM matchup. Alex Cobb is slated to make his fourth start of the spring, going up against Ivan Nova. Cobb has done well thus far, allowing just two earned runs in nine innings of, while striking out 12.

The Rays will take on the Minnesota Twins for the fourth time this spring, in their first night game of the Grapefruit League season. Tampa Bay is 3-0 in the Knutson Cup so far, as they attempt to pick up another win from Ron Gardenhire and the Twins.

On the bump for the Rays will be Roberto Hernandez, who has made a solid bid for the fifth spot in the starting rotation. Vance Worley will get the start for the Twins.

Tampa Bay cleared out the roster a bit today, reassigning or optioning eight players to the minors. Tonight’s starting lineups, the aforementioned moves, and other pieces of Rays related ephemera are below.

Hey, what d’ya know? Luke Scott is back in the lineup today.

Click on the photo to be redirected to an interview with Rays reliever Cesar Ramos regarding the Canada/Mexico WBC brawl.

Want to see Ben Zobrist and Team USA play on Tuesday? Head to Miami to watch the World Baseball Classic for just $5. (Photo and caption courtesy of the Tampa Bay Rays)

I wish I could see Ben Zobrist and team USA in the WBC tomorrow. If any of you go to the game and take photos of Zorilla, we’ll gladly put them up on the site!

Rays first baseman James Loney getting a little practice in prior to the Rays vs. Twins game Tuesday, March 5 in Ft. Myers.

It’s time for the second edition of This Week in Rays Baseball. We’ll do our best to recap all of the happenings with your Tampa Bay Rays from the past week.