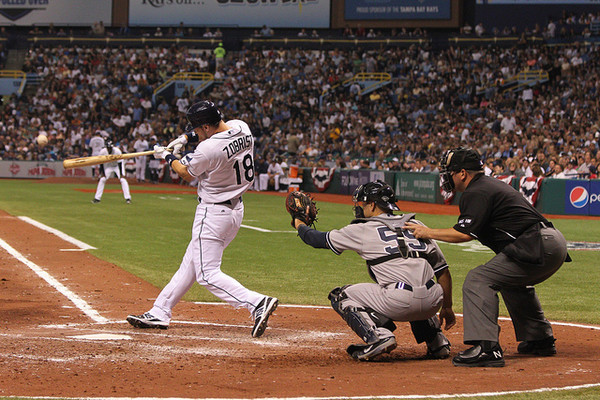 The Rays flew into Texas for a three game set against the Rangers following the royal 13-0 shellacking at the hands of the Indians Sunday. Jeremy Hellickson will try to right the ship opposite of Alexi Ogando in the 8:05 meeting. In case you missed it, you can read our series preview here.

Both C Stephen Vogt and C Robinson Chirinos have been acquired by the A’s and Rangers respectively. You may recall that both players were DFA’d prior to opening day in order to make room on the 40-man roaster for Shelley Duncan and Jamey Wright.

As per MLB Trade Rumors,

Chirinos, 28, missed the entire 2012 season after suffering a concussion. In 2011, he hit .259/.343/.376 in 319 Triple-A plate appearances, a disappointing offensive season after a breakout 2010 factored into the Rays acquiring him from the Cubs as part of the Matt Garza trade. After 2010, Baseball America wrote that Chirinos “always had shown an ability to handle the bat and control the strike zone, and now he has developed power to all fields.” They also praised his work behind the plate.

Both players were acquired for a player to be named later, or in the case of Vogt and/or cash considerations. Chirinos will go on the Rangers 40-man roster but will be in Triple-A, so he will not face the Rays this week.