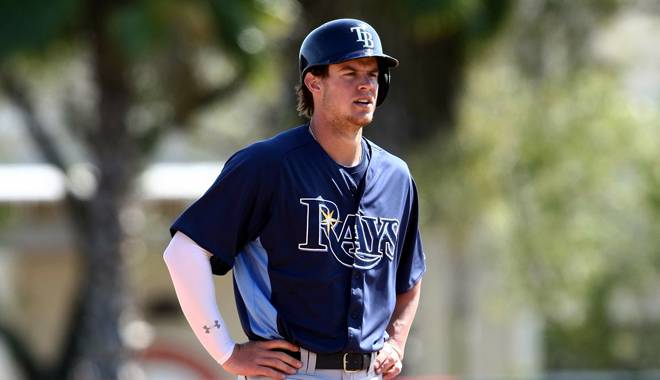 A quick, applicable, story. I was at Fergs last Wednesday night, along with — what seemed to be — every other Pinellas County Schools employee. Rays beat writer Marc Topkin was also there along with his wife, taking in the night’s end of the school year festivities. While watching Alex Cobb dominate the Tigers on one of the various televisions broadcasting the game, Topkin was peppered with a common question by many a few strangers, “When is Wil Myers expected to be called up from Triple-A?” His answer: Not in the near future. 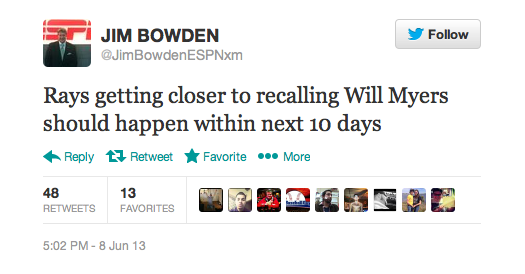 Rumors of the impending promotion of Myers began circulating, but I suspect that Bowden may have jumped the shark.

We can only assume that Bowden was referring to the Super Two deadline looming on the horizon. Granted the assertion that the Rays would have no financial incentive to keep Myers in the minors from that point on, is a correct one. However, Bowden may have overlooked a glaring fact — there really isn’t much of a need for Myers at the moment.

“Super Two status is determined by a date that can earn prospects called up for “most” of the season an extra year of market-value salary. Normally a prospect would only fight for market-value salary for the final three years of his contract through a process called arbitration. The team and player talk, and if they can’t reach a consensus on a fair salary, they go before an impartial judge.

That is, the Rays would be able to get Myers for an extra year — sans arbitration — in approximately a little more than 10 days. But a player would need to be benched, demoted, or put on waivers in order to make room for Myers. Who?

Kelly Johnson, Matt Joyce and Ben Zobrist have all performed well at the corner outfield spots this year. I couldn’t imagine any of them getting benched in favor of Myers. To that end, either Sam Fuld, Sean Rodriguez or Ryan Roberts would need to be shipped out in order to make room for the Rays über prospect on the 25-man roster, and I doubt the Rays would sacrifice bench depth. Topkin noted a caveat — If the Rays are ready to give up on a struggling Luke Scott*, they could create playing time for Myers by rotating several players through the DH spot. However if they didn’t cut Scott, Myers would be a man without a position.

Furthermore, Joe Maddon has noted from the beginning that any promotion would be a baseball-motivated decision — the focus on player development is the most important consideration when speaking about Myers. Though he has put together an impressive .286 BA/.359 OBP/.515 SLG/.874 OPS slash line, and he is his hitting .380 with eight homers and 27 RBIs over the past 16 games, Myers has been tasked with working on a few things in Triple-A. Tampa Bay will more than likely play the game of wait and see in order to determine if those numbers hold true over the long-haul, or until there is a dire need for Myers on the 25-man roster. If the Rays way speaks to anything, it’s the process. Myers’ readiness will ultimately be dictated by his ability to string together good numbers at the plate and in the field with constancy, not because they can get him on the cheap.

*We here at X-Rays Spex LOVE that option.