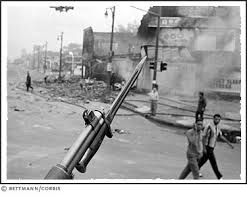 True to form, Detroit ruined itself tonight.  Some decent batting by the Rays and some shitty pitching by Detroit culminated in a 8-0 Rays VICTORY!  While the Tigers bullpen walked in 3 (Yes, 3!!!) runs in the ninth, Gonzalez tried to do what Detroit does best – start a riot – by throwing at BJ Upton’s head.

A couple of the Rays young guns showed up in a big way, Hellickson throwing wonderfully, giving up only 3 hits, no runs, and no walks, Benoit great as usual, then Eckstrom shutting down the 9th like a seasoned pro.

Really nice to see the Rays looking up again after a few rough days.  These mood swings might just get the best of me by the end of the season, though.

Here’s the line from tonight’s game:

The most impressive stats of the night?  Zero players from either team sustained gunshot wounds and only six were offered crack from fans in the stands.

One more night in the 8-mile, boys, then run for your lives!

I contemplated not watching last night’s Rays’ game versus the Detroit Tigers, primarily due to the amount of anxiety just thinking about it was causing me. But, then I reminded myself that we are married…the Rays and me that is. I have to stick with them through thick & thin, through the good times and the bad. The last several games are a perfect example of the “Bad”. Let’s go down the list:

1. Ended their phenomenal homestand with 2 losses (split the series) to the Minnesota Twins.

2. Carlos Pena goes on the DL.

3. Swept by the Toronto Blue Jays, including a 17-11 loss, in which James Shields set a major-league record by giving up 6 HR’S, and the very next day Brandon Morrow takes a 16 strikeout NO-HITTER all the way to the top of the 9th inning with 2 outs. Evan Longoria, who was 9-58 coming in to the at-bat, singled (barely) to right for the Rays first hit of the day…Dan Johnson, the very next batter, went down on strikes for strikeout number 17 and a 1-0 loss. This marked the Rays’ 5th straight loss and tied a team record for strikeouts.

4. Wade Davis and Jeff Niemann both go on the DL on the same day.

Anyway, I decided to watch the game. I figured if anyone could save the Rays last night, David Price could do it. Price came out with really good stuff and great command early. A couple of innings later it was looking like he was having a little trouble with his command, running up his pitch-count very quickly. But then, in the bottom of the 5th Price struckout the side including Miguel Cabrera, Carlos Guillen, and ending the inning with a 100 MPH fastball to Jhonny Peralta for strike 3! 100 MPH on his 115th pitch!  Price had 9 strikeouts and held the Tigers to only two runs, unfortunately, he had racked up a pretty hefty pitch-count and would not return to the mound in the bottom of the 6th, but with a little help from Chad Qualls, Joaquin Benoit, and Rafael Soriano, the bullpen was able to shut it down for Price’s 15th win of the season and a new team record. The Rays beat the Tigers 6-3, which is hopefully a sign of the offense getting going again as well.

With Wade Davis and Jeff Niemann going on the DL, the Rays called  RHP Jeremy Hellickson back up from AAA Durham to start tonight for Davis in Detroit against the Tigers and Andy Sonnanstine will probably fill in for Jeff Niemann for now. Hellickson’s major league debut was on August 2nd at  home against the Twins and he was fantastic! Giving up only two runs over 7 innings. The Rays also called up RHP Mike Ekstrom from AAA Durham to add some depth to the bullpen.

All that said, hopefully things are back on track for the Rays. The Yankees lost to the Red Sox last night, which leaves the Rays sitting only 1.5 games out of first and still with a strong lead in the AL Wild Card Race. We’ll have to see how things go tonight. One game at a time. Go Rays!

Report reveals that the New York Yankees trademarked the chant “Yankees Suck” in 1996!

Case in point:  Dyslexia’s poster-boy, Jhonny Peralta will be wearing this during tomorrow night’s game….

Apparently the Yankees discontinued the employee dental plan to pay for their shitty new stadium…but, hey at least grandma here got her “Inaugural Season” t-shirt!