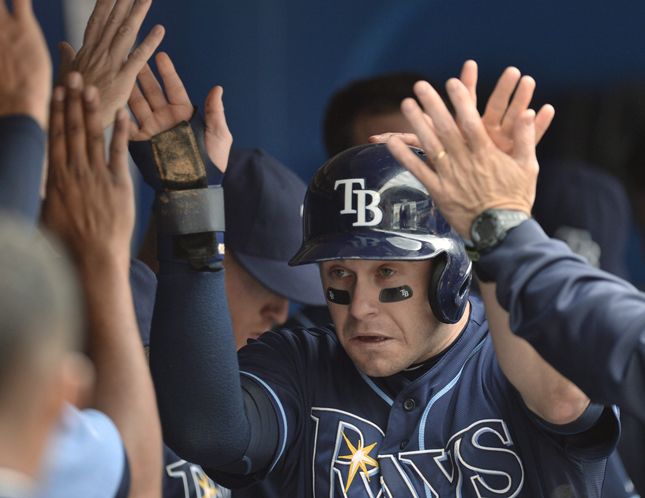 Sunday’s 7-6 — game 162 — victory can be summed up in five words: A tale of two halves. Tampa Bay charged out the gate, tagging a pair of pitchers (Todd Redmond and Neil Wagner) for six runs in the first inning, but almost, predictably, blew it in the late innings. I’ve said it before and I’ll say it again — a win is a win is a win. However, this win was bittersweet. The pitching and offense looked dominant in the front five, yet they didn’t resemble a playoff team in the bottom four. Be it as it may, the Rays will head to Texas Monday for a one game tie-breaker, ahead of the AL Wildcard game Wednesday, in Cleveland. A few game peripherals are below.

Home plate umpire Paul Schreiber clearly wasn’t having a great day, but his unpredictability was benefiting Toronto more than Tampa Bay. Outside pitches to Rays lefties were all being called strikes, while a Blue Jay batter got a ball in much the same spot, and Jays righties were given balls all around the edge of the zone from pitches that should have been strikes.

When a manager has made all the correct moves, and his team is still in the woods, he has only one recourse, only one way to make a statement, both for his team and to the umps. It’s fair to say that tonight Maddon pulled out all the stops.

It’s come down to this. If the Rays can beat LHP Martin Perez (10-5, 3.55 ERA) and the Rangers, they’ll head to Cleveland for a one game play-in against the Indians. And if they lose? Welp… David Price will take the bump for the Rays.

The 22 year-old Perez last appeared in a game against the Astros, throwing seven innings of six hit/three run ball. He’s been good this season, with 11 of his total 19 starts coming as rulebook quality starts. Even then, he’s only given up four or more runs five times this season. Perez has been described as a, “fastball/curveball/changeup pitcher who has also started mixing in a slider. His fastball is generally in the low-90s, though it can get up to 96, and the potential he shows with his change — described as his best pitch when he signed in 2007 — is one of the reasons the Santana comparisons have been invoked. On the other hand, Perez still has major issues with the consistency of his command, and he has had a tendency to react poorly to adversity and let problems snowball on him.”

Nelson Cruz has been reactivated and is expected to be in the lineup tonight. Cruz has been good against Price, posting a career .500 BA/.571 OBP/1.000 SLG/1.571 OPS slash line against, with two homers and four RBI in 12 total at-bats. Adrian Beltre, Alex Rios, and Elvis Andrus have all put up good numbers against Price as well.

Both teams have been very good in the last 10 games of the season (after mediocre play throughout much of August and September), though it could be argued that the Rangers may have an edge after sweeping both the Astros and Angels to end the season on a seven game winning streak. Then again if one thing holds true, it’s that the Rays, historically, tend to ratchet things up against teams that are considered to be contenders — their 47-37 record against contenders (both from this and last year) speaks to that.

Roger Mooney of the Trib did some interesting sleuthing on the subject of one-game tiebreakers. He found:

The Rays and Rangers meet for the 14th tie¬breaker game in major league history.

Seven of the previous 13 winners went on to the World Series, and four of those seven won the World Se¬ries.

All-time, road teams have gone 4-5 in one-game playoffs, but during the Wild Card era they are 1-5.

The following Rays players and staff have experienced a tiebreaker game in the majors:
Don Zimmer, managed the 1978 Red Sox, lost to Yankees, 5-4 on Oct 2, 1978 to decide the AL East